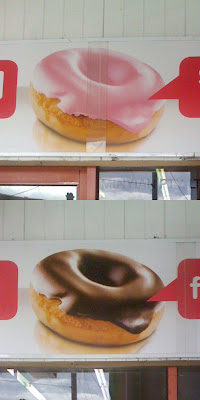 The $1 donuts [sic] have slunk back into The World. Be mindful and alert, as they may mean to do you harm. They have changed the colour of the speech balloon, but the shape remains as does the typeface - Helvetica Rounded. They've streamlined the aesthetic a bit, but probably used the same working files. 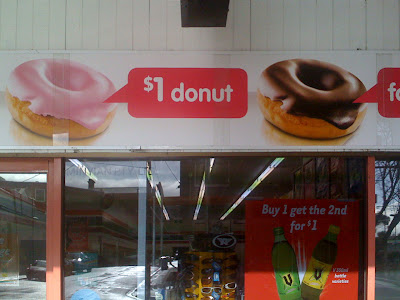 The image above reminds me of something that happened to me in the recent past. I was heading to a friends house and thought to buy some chips. The convenience store had a deal where you could buy two packets for $3.60, one pack cost $2. I picked up a pack and took it to the counter to pay. The clerk said to me: "You don't want to get another packet? Two packets are only $3.60." I said no thanks, and he asked me again, his tone escalating slightly, "Are you sure? It's a saving of 40¢." "Thanks, but I'll be fine with the one" I said politely. At that point, the point where he realised that I wasn't prepared to spend an extra $1.60 in order to save 40¢ and that I had sufficient chips, he gave me a funny look like I was some kind of lost cause. He may be right.

The word 'reminds' is not in my spell-checker.
Labels: Tedium, The World
Newer Post Older Post Home