The 'one dollar donut' [sic] lied to you

So I was walking past a Seven Eleven and I noticed that the doughnuts starring in the (this is the doughnut talking) "I'm just $1" and "1$ doughnut" campaign were, in fact, THE SAME doughnut. To wit, between the chocolate and strawberry doughnut, one of them is an impostor. My money's on the chocolate being the grandaddy-of-all-liars as it'd be easier to darken the strawberry's lighter hue. 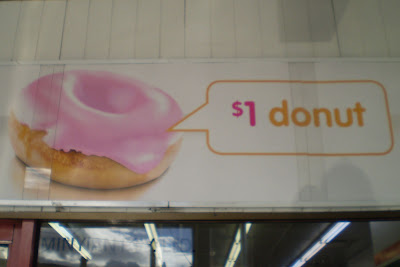 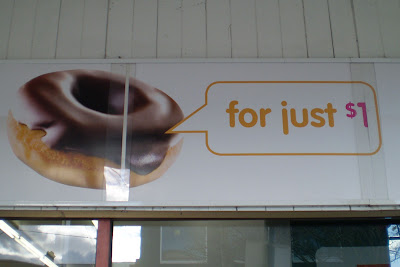 Why not photograph two doughnuts for variety? Are they trying to suggest that all Seven Eleven doughnuts have the same uniformly drippy icing?

I meant to blog about this a while ago, which kinda loses the freshness of this post as you won't be able to track down the doughnuts yourself and demand answers (the promotion finished in July). I found these images while cleaning up my computer and thought people needed to know about this insidious example of a BLATANT VISUAL FABRICATION.