I was on the phone, taking notes, and I drew this: 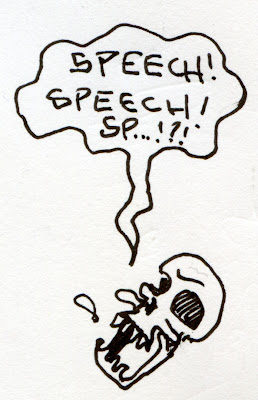 I used a (discontinued in Australia) Rotring Art pen with an 'F' nib-type and some recently new ink. What I like about the ink for these pens is that the cartridge is sealed by a tiny glass sphere which is pushed into the reservoir once you break into it with the nib. The pen itself is one of my favourite posessions.
Labels: Sketches

... But sometimes it's an ETERNITY 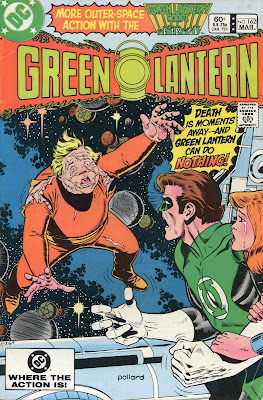 This is the cover of Green Lantern No. 162, also known as 'the cover with the exploding boy'. I was looking for this image online but could not find, so I thought I'd scan it from my personal collection and post it here for the benefit of future generations.
What I like about this cover is that it accurately shows an aspect of the story inside as it actually happens, rather than offering some crazed hyperbole which is later resolved or was irrelevant to the issue. Yes, in this particular issue a child is ejected into the vacuum of space and yes, Green Lantern can do NOTHING! No, EVERYTHING WILL NOT BE ALRIGHT AND YES, WE EXIST IN A CHAOTIC AND MEANINGLESS UNIVERSE.

Ordinarily, one-sixth of a minute flies by like nothing... 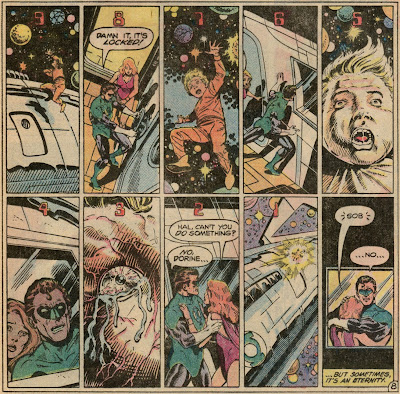 I was a teenager when I first read this and found it to be quite strong stuff. The pacing is brilliant, full of emptiness and culminates with a kid exploding. All the while the hero is completely helpless. The space-aged font countdown is a bonus, a chilling echo of the 'we-have-liftoff' countdown type.

But there's hope. This is, in fact, a fiction. While it may pose a number of existential questions, the truth is (allegedly) that the human body does not explode in the vacuum of space. Among other things some swelling may occur. Also, you will do better out there if you don't hold your breath first. Exhale.

If any of my readers find themselves in this awkward position, I hope I have offered some degree of assistance. 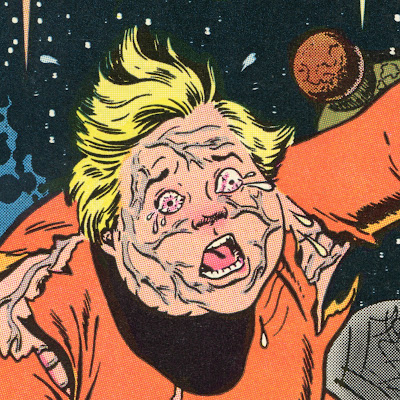 While researching some work I've been exploring the Google Earth app, which is helping me think about stuff. Recently they added maps of the ocean floor, Mars and the Universe. I was intrigued by the Universe map, and how Google Earth would interpret this. After "flying" around for a while I noticed this: 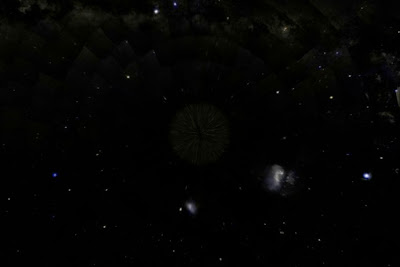 I thought at first it was an odd cluster of stars, but it looked too neat, too precise. Note that you can see the facets that make up part of the rest of the Universe in the above picture. 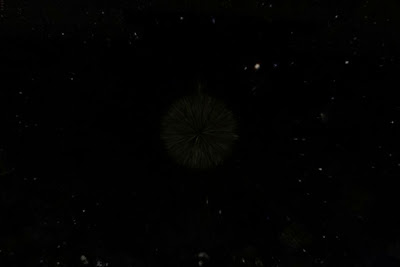 The Universe "model" is actually a (relatively) enormous polygonal dome (or two domes forming a sphere), with images of aspects of the Universe laminated onto it. What these images show is the point on the dome where the textures converge. The nadir, I guess. 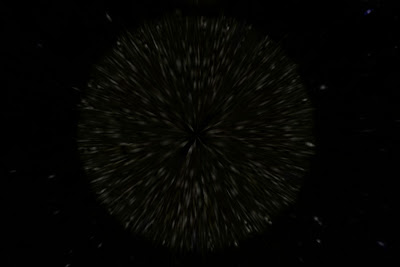 We can go a little closer in, until it becomes a beautiful, noisy explosion of picture-shards. 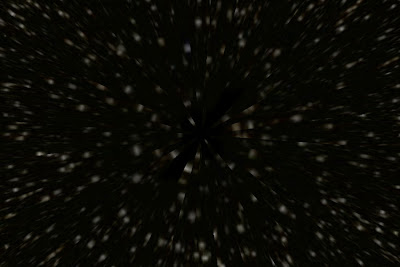 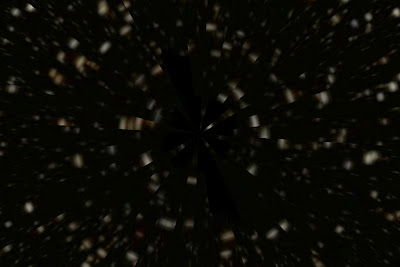 The whole Universe/dome thing made me think of the Flammarion Woodcut: 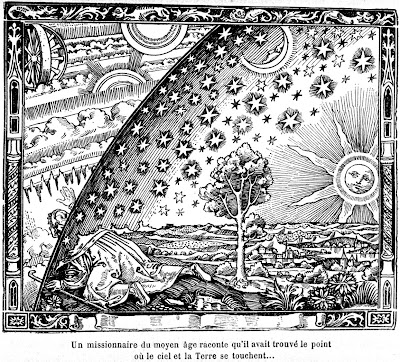 I started wondering what lies "outside" this representation of the Universe, and all I could think of was data without end. The pilgrim looking beyond the veil in the Flammarion print represents a looking beyond preconceived notions of the known Universe and also beyond representations of the Universe. I think with digital technology we also can look beyond the representation until we spy the workings underneath it all, even if they are entirely conceptual. I mean, you need to take a conceptual break looking at the stars to not consider them part of a dome as we are trained to see them this way after living all our lives on a sphere-like object.
Google Earth does an excellent job of serving up the harvested data of the Universe in an easily navigable and accessible way. I reckon it will only be a matter of time before technology can gather actual 3D representations of the Universe, piece by piece. Maybe.


With apologies to David Niven.
Labels: Screens, Technology, The World 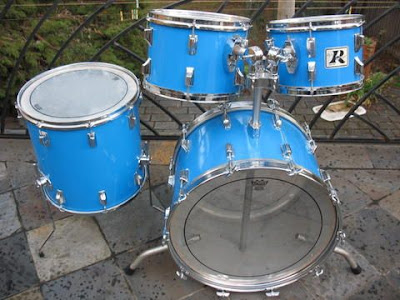 Today I put a deposit on the drums pictured above.

They are almost full-cyan in colour. Almost. 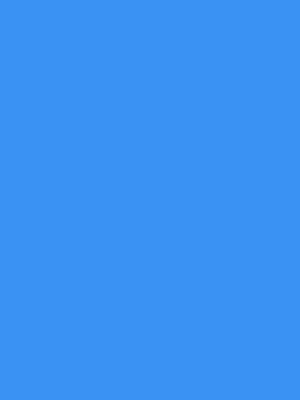 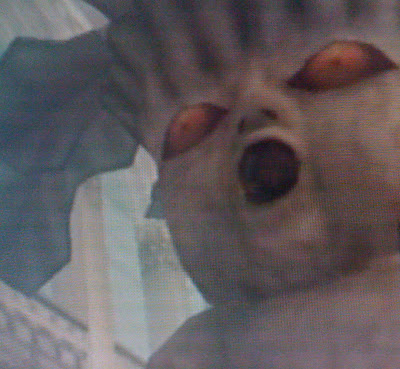 It's a "Mandragoran", based on the Mandragora or Mandrake root. I photographed it off my TV. 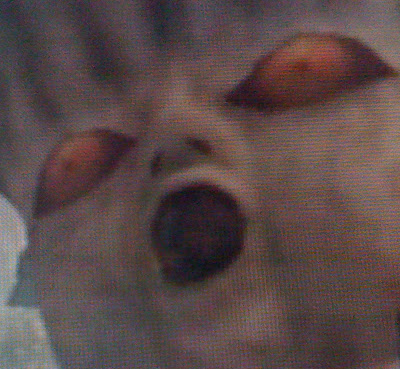 Recently I rekindled my affection for my trusty Dreamcast video game system. In an almost random selection, I booted up a game I haven't played for about 4 years - 'Sword of the Berserk: Guts' Rage'. Yes, this game is as incredible as the title suggests, albeit a little flawed. 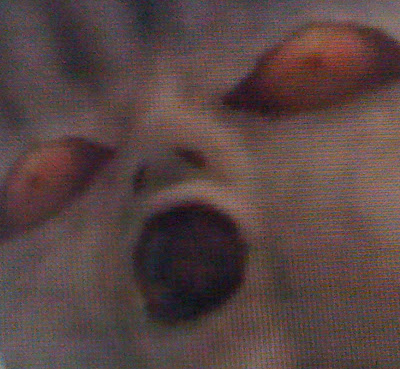 Based on a manga and anime, the game's protagonist, Gattsu or "Guts" travels around hacking abstract plant/human/hybridised zombies to pieces with an enormous 6-foot sword. It's a lot of fun. Anyway, it had been YEARS since I last played this game after setting controller down in frustration at not being able to pass a certain level and then inadvertently continued living my life. On picking it up again I ended up passing the area where I was stuck in two goes. TWO. GOES. I then proceeded to finish the entire game in the remainder of the sitting. 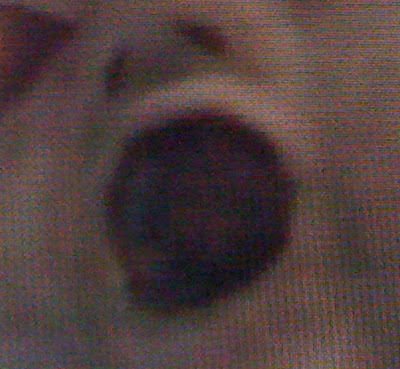 The pictured Mandragoran is one of the last bosses in the game, so I hope I haven't spoiled it for anybody planning on playing this. The Mandragoran could well be one of my top favourite bosses in a video game. The mechanic to beating it was pretty straight-forward, but the boss-design was phenomenal. The creature is a giant white daikon-esque root, but with a baby-face and big spikes clubs for arms. It will regularly scream and invert the screen, causing you damage. After a while it spits spheres of matter at you. Here's the cutscene preceding the battle: 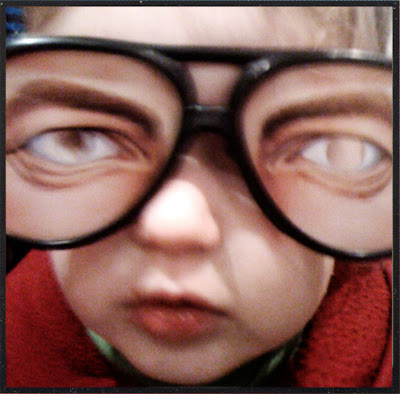 A child and his eyeglasses. The best I could manage...
Labels: Paternity 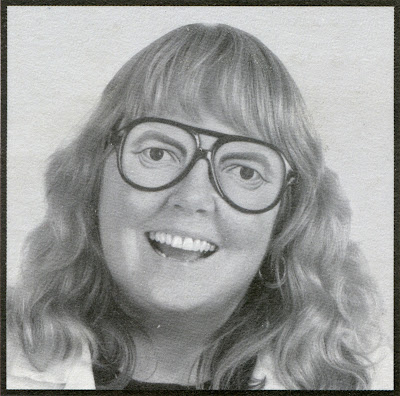 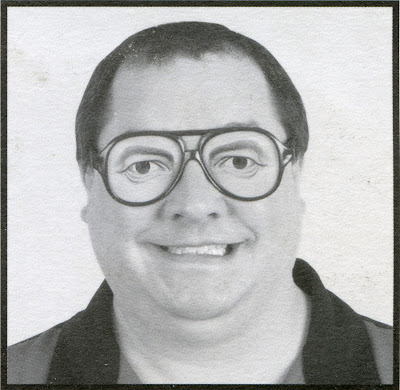 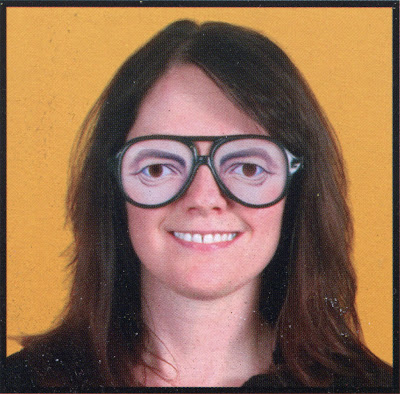 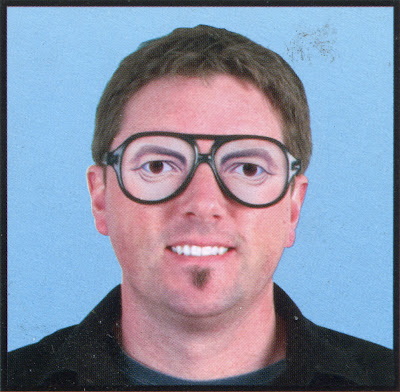 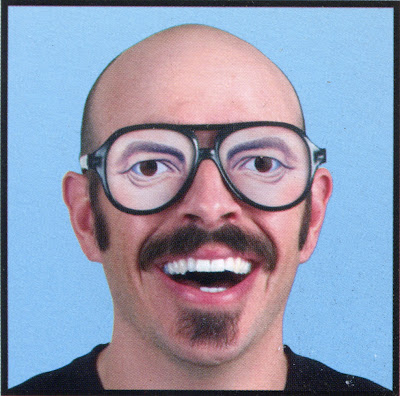 Scans from some 'Bizarro Glasses' I bought for Iggy yesterday with the tagline "AMAZE YOUR FRIENDS AND AMUSE YOURSELF".

The bottom one is the winner of the 'Tobias Fünke look-alike competition'.
Labels: Found images, Plastic, Scans 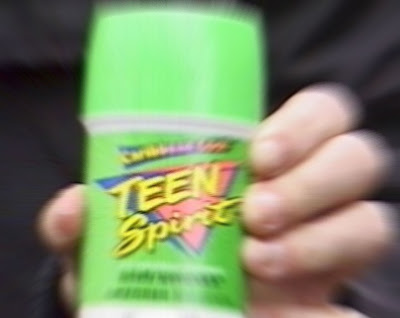 This previous weekend held JJJ's Hottest 100 of All Time. Unsurprisingly, the song voted #1 was 'Smells Like Teen Spirit' by little-known indie outfit, Nirvana. Blah blah blah, this song brings back memories, blah, heard it years before it was popular, blah blah something else about musical superiority, hello...hello...hello...how low.

Anyway as some kind of historical footnote, here's a mix I made of some cover versions of the song for both your reference and archives. They are all electronic with the exception of Patti Smith's version opening the mix. It goes for about half an hour so it's not for the faint-hearted. Also note that there's some curse-words and adult themes in a couple of the tracks so if this bothers you, don't.

I mentioned this mix to Bec and her keywords were: 'Sacrilegious' 'Boring' and 'Why'.

[Note: I've added a 'mixes' link to the 'Kontakt/Presence' section on the right. This links to a MediaFire folder of some other mixes I've made.]
Labels: Music

If in doubt, headphones 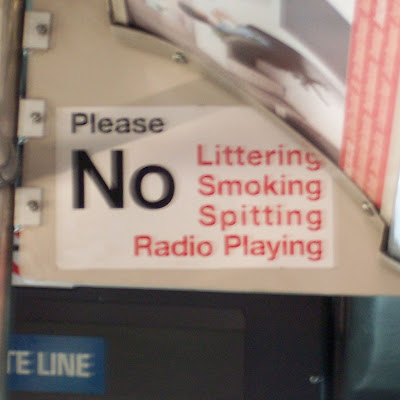 Getting on the bus this morning I was confronted by a noisy onslaught of commercial radio. While purchasing my ticket I fumbled with my money trying to block out an ad for 'Carpet Call', spoken by that same guy who seems to do all of the lo-fi voice-overed ads on commercial radio.

I made my way to my seat (back-of-the-bus-style) slung my baggage on the chair next to me, desperately put on my headphones and scrambled for some music to drown out the radio chatter. I chose the album 'Scumdogs of the Universe' by Gwar for it's cleansing properties.

I'm pretty sensitive to certain types of sounds and I take umbrage to traveling on paid public transport and being subjected to commercials. At least with posters you can look away or out of the window or something, but without headphones the radio is pretty-much unavoidable. In fact, sometimes it's played so loud it leaks in between or over quiet parts of tracks. This also goes for the music played on the bus which, in the case of most contemporary pop music is pretty-much an ad for a product anyway.

Personally, I think that if audio-based ads are being played on the bus (granted some drivers don't play the radio, but they are the exception) travelers should get a percentage of their ticket price paid for by the advertisers. CONSIDERATION.

[Note that the graphic attached is from a bus in New York, where I never noticed any of the aforementioned malarkey].
Labels: Rant
Newer Posts Older Posts Home
Subscribe to: Posts (Atom)