Allegedly we're on the cusp of a Golden Age. Allegedly. Yes, I have doubts, but I'm reasonably certain that the Age of Whimsy is at a close and we're close to ushering a New Age of Truth, Honesty and an openness to Reality in its raw(er) form. As to it having a Golden hue - use your own discretion. How this manifests can be noticed between the cracks, nestling underneath the messages of impending doom, doubt and global distress. The fact that advertisements now seem to have a greater edge of hysteria is a good sign.

I was recently browsing the App Store for the iPhone and I noticed that they have released an iPhone Skype client for free. When I first got my iPhone I thought Skype would be a given, but it seems that Apple's agreement with telephony providers meant no VOIP as that would take money away from paid calls over the users chosen network. This seems to have changed - quietly and inconspicuously. Read into this what you will. 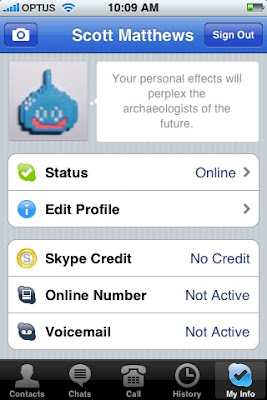