Notes from the far side of town

On going through some old books today, I found this: 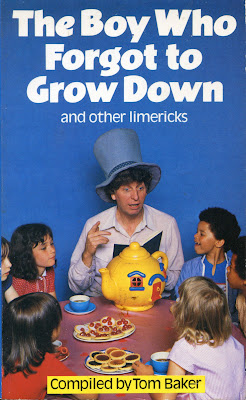 This collection (published for the 'Help A Child to See' charity) contains limericks by British celebrities of the day including Spike Milligan, Michael Palin, Judi Dench and the Arsenal Football Club as well as some limericks by children.

On flipping through the book this morning, it was Tom Baker's contribution that jumped out at me. Here: 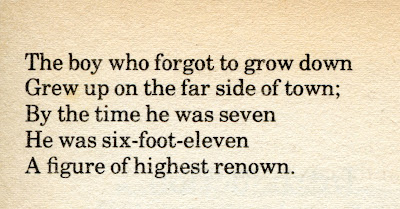 In the introduction, Baker asserts 'Never mind what the title means!' but I think this is to throw the reader off the scent of a deeper meaning in his limerick and perhaps this book in general.

Consider: the limerick is about growing up, and Baker reflects this in his introduction suggesting that we're always being told to 'Grow up' but we shouldn't take this (or growing up itself) too seriously. Personally I think Baker's limerick is written about the human race and our linear perspective of time.

The 'Boy' who forgets to grow down is us - caught in an irreversible progression of life, growth and time. It's no mistake that he inverts 'growing up' into 'forgetting to grow down' as this suggests that somewhere within us we have the ability - an ability we've forgotten as a species -  to grow down, or experience time in the reverse or in an alternate direction. Also, think about 'Grew up on the far side of town' - the aforementioned 'boy' is from another place, a place that isn't here. Baker is seeing us from the perspective of an alien. 'By the time he was seven/He was six-foot-eleven' - the 'Boy' is trapped, unable to escape a process that will (if followed to its logical conclusion) leave him ungainly and enormous and it's all happening fast. I believe this reflects the species' innate programming to perpetuate itself as a collective - regardless of the consequences - while each individual member remains essentially alone. It could also be talking about the oft quoted feeling people have of 'time flying'. The final line 'A figure of highest renown' references our desire to be successful, to be recognised as beneficial for the species - again regardless of the consequences - while gently mocking this idea of the quest for recognition through the double-meaning of the word 'highest'.


'Well, I'd hardly finished the first verse,' said the Hatter, 'when the Queen jumped up and bawled out, "He's murdering the time! Off with his head!"'

The Hatter also carries a pocket-watch which he doesn't really seem to comprehend. Additionally, he tells Alice that his watch tells him 'what year it is' (*COUGH* time-traveller *COUGH*). He doesn't 'get' our perception of time which suggests he's experiencing his own different and unique sense of time.

Baker is depicted telling stories from a blank-covered book to a some human children, his finger pointing up (maybe..?) He's trying to teach them something but alas, like Alice's inability at the tea-party to decode the Hatter, his knowledge will be interpreted as a bunch of nonsense rhymes. Or limericks.

My current feeling about this book is that it actually isn't a book but an ancient forgotten codex disguised as a mid-eighties limerick compilation. It is in fact a talisman designed to protect the owner against time's perpetuity. I would hold it aloft on a stormy night and scream into the swirling vortex: 'TIME, THOU SINGLE-DIRECTIONAL JUGGERNAUT! YOUR REIGN OF TYRANNY IS AT AN END - HAVE AT THEE! HAVE AT THEEEEE!' but I fear I may wake in the morning a swaddling infant, ignorant of all I've learned.