I've been enjoying the revamped Ambush Bug Year None series, and have been waiting for the delayed issue 4 which is allegedly now on sale tomorrow (after previously being posted to be on sale 29th October). I'm wondering if the delay somehow fits with the theme of the "missing" Ambush Bug (see the cover here) as I think the logical step for this 4th-wall-violating series is to manifest itself in the real world.

Anyway, I don't want to focus on a publication being late, especially if it's some kind of high-concept meta malarkey of which I completely approve.

So here's a scan of my favourite page from ABYN #1, where Cheeks the Toy Wonder (previously blogged about here) becomes an OMAC, falls to earth and does nothing. 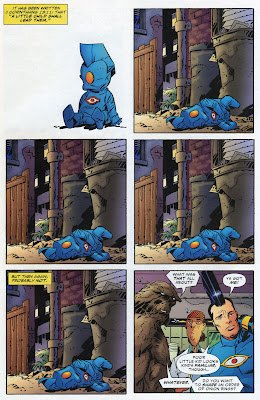